Music from the monasteries in Switzerland

In September 2005 the Swiss National Science approved the project "Music from the monasteries in Switzerland" submitted by Luca Zoppelli from the chair of musicology in Fribourg and contributed a considerable sum. In cooperation with the Swiss RISM office, the Swiss Musicological Society, the Swiss National Sound Archives and an international research committee, this project aims to sort out and examine a significant number of musical sources from the 17th, 18th and 19th centuries which have been preserved in different monasteries in Switzerland. A further goal of this project is to interpret the historical and liturgical context of these sources and to make them accessible for researchers and performers. The research project therefore endeavours to explore a field largely unknown and to open an entry for these assets into the general memory and conscience of music.

The research of this repertory is well advanced. Several volumes of critical editions of selected works have already been published. Due to the cataloguing of the music inventories in the monasteries of Einsiedeln, Engelberg, Disentis, Müstair, Neu St. Johann, the collegiate church of Beromünster and the convent of the Benedictine sisters of St. Andreas in Sarnen, the Swiss RISM office has performed essential preparatory work in order to make these sources accessible. Thanks to this effort we have knowledge of the impressive amounts of manuscripts and prints of the 17th, 18th and 19th centuries which exist in these libraries. The research and transcription of a certain number of selected pieces of these assets suggests itself for many reasons: 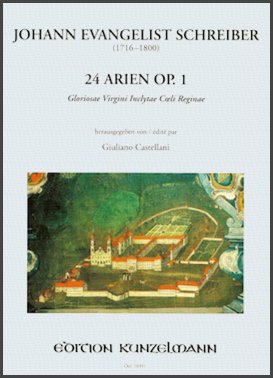 Present-day research of this topic presents itself mainly with a great lack of editions. Therefore the main task of the project is the publication of music editions based on the catalogue of the Swiss RISM office. An editorial board is in charge of the editions for the relevant music sources - selection, transcription into scores according to philologic criteria, analysis, classification of the stylistic, historic and liturgical context, publication together with an introduction and a critical commentary. The music documents will be published in the series of the Swiss Musicological Society, presided at the time by Therese Bruggisser-Lanker.