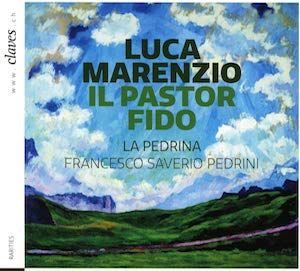 In the archive of the Swiss municipality of Zuoz, in Engadin, a very precious music book has been preserved. With the support of the RISM Switzerland, the director Francesco Saverio Pedrini and his ensemble La Pedrina chose to record a selection from this collection with the Claves label. The choice made was for madrigals by the Italian Renaissance composer, Luca Marenzio. The recording was scientifically accompanied by the Marenzio Project, based in the USA. The CD contains all the musical settings by Marenzio of texts from Battista Guarini’s pastoral comedy Il pastor fido.

The Zuoz collection consists of both French psalm settings, and Italian Renaissance madrigals by Claudio Monteverdi (1567-1643) and Luca Marenzio (1554-1599). Balthasar Planta (1685-1764) from Zuoz acquired this collection in 1707 during his military service in Amsterdam. The individual prints originate particularly from northern Europe, including Haarlem, Amsterdam and Antwerp. Among these is a collection printed and published in Antwerp in 1632 by the heirs of Pierre Phalèse (1510-1573) with five-part madrigals by Marenzio. This edition is valuable in two respects. Firstly, Phalèse added a basso continuo to Marenzio's purely vocal compositions; secondly, the collection in Zuoz is currently the only known copy of this edition. The inclusion of a basso continuo group, as foreseen in the source of 1632, makes the project unique. The CD has been available since July 2018.